Brain Spectres are an enigmatic caste of Zerg Overlords who were captured at some point during the First War (either as Larvae or as existing Overlords) and later outfitted with Terran cybernetic technologies for reasons unknown. As their names are similar to another group built from a similar enhancement project known as Spectres. However, the connections between Spectres and Brain Spectres, if any even exists, is unknown. Speculation exists that they may be in control of the Spectres or that they may be able instead to take control of other Zerg, likely for use in other Terran projects. 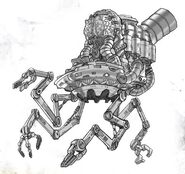