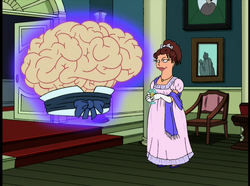 The Brain Spawn are a race of big, flying brains who travel from planet to planet and destroy all sapient thought, which they hate, eventually eliminating the planet in question.

They came into being milliseconds after the Medium-Sized Bang and have been at war with the Nibblonians ever since. The Brain Spawn's ultimate goal is to gather all the knowledge in the universe, ultimately leading them to construct the Infosphere. Once all information in the known universe is collected, the Brain Spawn intended to destroy the universe, to ensure that no new information would be created, although this was stopped by the Planet Express crew.