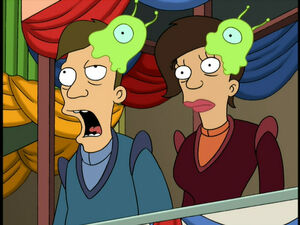 Depend on the Host

Futurama
Brain Slugs are little parasitic organisms who superficially resemble a type of semi-amorphous slugs. They attach themselves to the heads of intelligent beings (such as Humans) and control them so long as they are latched onto the subject's head. They are about as big as a fist, green, translucent and have two feelers and one enormous eye. They are not intelligent enough to be considered a galactic threat. These aliens have been known to attack humans on a regular basis and have last been spotted on Earth in 2016.

A person possessed by a Brain Slug will be likely to speak in a monotone voice and do everything to further the spreading of Brain Slugs throughout the universe, but the easiest way to tell a person is infected is by the brain slug sitting on their head. The recommended procedure of dealing with a brain slug victim is to act natural and switch to a garlic shampoo. Another way to deny attachment is wearing a helmet. Fortunately, Brain Slugs are not very intelligent, minimizing the risk. Once removed from the afflicted person's head, the person returns immediately to normal. It also seems that a brain slug will starve and die if the creature it is attached to is particularly stupid i.e. braindead.

On Earth we see one example of Brain Slugs being politically active through those they have attached themselves to, though being none too bright they've made their intentions rather public as part of a Earth's democratic system of government. The Brain Slug Party has never had a candidate run for office on Earth but it seeks to attach a brain slug to every working man and give great subsidies to the Brain Slug Planet. It promotes itself as being a participant in Earth's democracy but its real aim seems to be making Earth into a tributary state, or in the most extreme to dominate the planet by infiltration of its political system. Hermes and the Professor have both briefly been members of the Brain Slug Party though it's not known if the slug was attached before they joined or after they enrolled.

Retrieved from "https://aliens.fandom.com/wiki/Brain_Slug?oldid=182670"
Community content is available under CC-BY-SA unless otherwise noted.