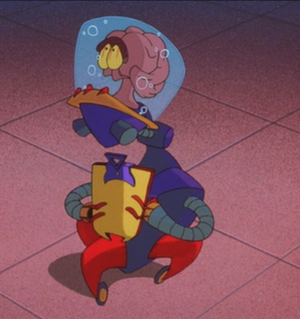 Buzz Lightyear
The Brain Pods are an enigmatic race of sapient cyborgs which work for Evil Emperor Zurg on Planet Z. A Brain Pod's body consists solely of a brain and a pair of eyes placed in a cybernetic body. Although they seem to receive (poor) payment for their work, they are actually an enslaved species and secretly desire to escape from Emperor Zurg's control. They have no individual names, being referred to by their numbers.

The Brain Pods are seemingly the smartest of Zurg's minions and are usually engaged in scientific research, while the insectoid Grubs are concerned with more technical and maintenance duties and the robotic Hornets are mainly used as battle soldiers.

The origins of the Brain Pod race are still unclear. Brain Pod #29 has once stated that he was already working for Zurg when he agreed to give up his body to become a cyborg (apparently, he was promised a raise in payment, but that never happened). This would most likely indicate that Brain Pods are originally Grubs, if not by the fact that they have humanoid eyes, very different from the typical insectoid eyes displayed by Grubs.

Retrieved from "https://aliens.fandom.com/wiki/Brain_Pod?oldid=203223"
Community content is available under CC-BY-SA unless otherwise noted.