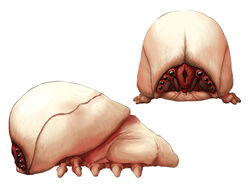 Brain Bugs are the leaders of each Arachnid colony, and only must answer to the Arachnid Queen, and it has been assumed that they are only created once a colony has reached a certain size. They are believed to be telepathic by nature, and are known to assimilate knowledge from victims by sucking out its brain(s); how this process works is not understood.

Some information obtained hints at them having a symbiotic relationship with the entire Bug colony, to the extent that if the local Brain Bug perishes the entire colony would die off, although it is not known if the Queen would survive long enough to continue the colony from the very beginning again.

They are carried around by a swarm of another morphological caste, the Chariot Bugs.