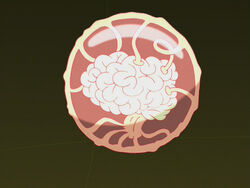 The Brain Balls are the leaders of the Spheroids, and the former rulers of Spheron I. Not much is known about the political affairs of the Brain Balls, but their last act on Spheron I was to negotiate with Bender and Henry Kissinger to end the war they were fighting with Earth.

However, given a scheme devised by Zapp Brannigan and Richard Nixon, Bender's ability to blow the planet up by saying the word "ass", eventually gave them the triumph card, and the Brain Balls surrendered their homeworld to Earth. Before going to the negotiations, Zapp described them with "they've got a lot of brains and they've got a lot of kutzpa! and they booooooooouuuuuuuunce!!!!"