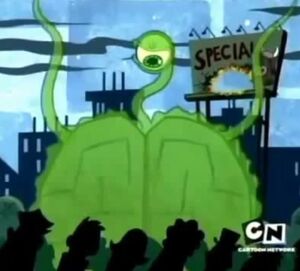 Increases with the ingestion of brains

The Grim Adventures of Billy & Mandy

The Brain-Eating Meteor is a mysterious extraterrestrial life form that once crashed on Endsville, Earth, to feed upon the brains of the natives.

This creature physically resembles a large, brain-shaped meteorite covered in partially-transparent green slime, which can create grasping tentacles at will. It has a single eyestalk, and its eyeball can actually open up like a pair of mandibles.

Once it crashes on a planet, the alien survives by consuming the brains of local creatures, such as Humans and Cats on Earth. The brains are extracted from living victims by their ears, and can be ingested by the alien's tentacles or eyestalk. Despite its apparent lack of a conventional mouth, the Brain-Eating Meteor can communicate with others by singing, possibly by means of telepathy.

Whenever someone approaches the meteorite crash site, the alien's first instinct is to feed upon them, but if it finds that the intended victim is too stupid to be a source of nourishment, it will instead befriend that person and convince them to bring more victims.

A voracious creature, the Brain-Eating Meteor won't be satisfied until it devours the brains of every single person in the area, growing larger as it does so. Victims whose brains have been eaten are kept alive in a zombified state, indicating that the alien might be controlling their bodies. However, if a person's brain is particularly strong or "spicy", it may overtake and assume control of the alien instead upon consumption.

Retrieved from "https://aliens.fandom.com/wiki/Brain-Eating_Meteor?oldid=172277"
Community content is available under CC-BY-SA unless otherwise noted.