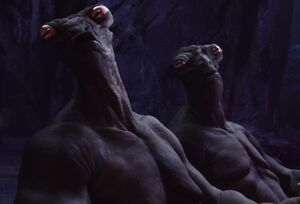 The Boulan-Bathor are a sapient species of portly humanoids with a culture dedicated to the appreciation of food. Their blood is light-green.

Boulan-Bathors hail from the planet Goara. They're one of the 3,236 species known to inhabit the space station Alpha, where they're ruled by an imposing monarch. They use fishing rods to catch bioluminescent butterflies.

Retrieved from "https://aliens.fandom.com/wiki/Boulan-Bathor?oldid=169448"
Community content is available under CC-BY-SA unless otherwise noted.