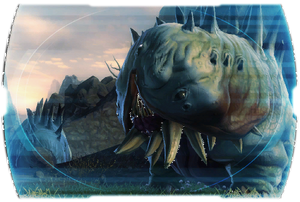 The enormous and majestic Bormus once moved in herds across Balmorra–until the Imperial bombardment wiped out many of the slow-moving behemoths and the pollution from Balmorra’s destroyed factories poisoned the land and the bormus’ food supply. Despite their size, bormus are incredibly gentle beasts and formerly relied on their herds for protection, stampeding potential predators. Now that they are on the brink of extinction, lone bormus are easily picked off by smaller, faster predators.

Retrieved from "https://aliens.fandom.com/wiki/Bormu?oldid=163920"
Community content is available under CC-BY-SA unless otherwise noted.