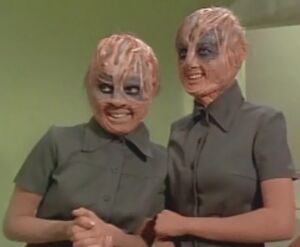 The Boreons are a sapient humanoid race hailing from the planetoid of the same name.

Physically, they're very similar to Humans, and also require similar environmental conditions. The most notable difference is that the skin on their heads has a rough and uneven texture, as if it was partially melting. They have grayish-blue patches around their eyes, and don't seem to have hair.

Boreons are a friendly race, and very welcoming towards those who wish to settle on their world. Part of this is because they consider their planetoid very underpopulated and are in need of émigrés from other races; especially males. Although their appearance can be considered grotesque for a Human, they are a hospitable species, the planetoid's climate is temperate, and the Boreons describe their own language, arts and culture as being almost identical to Earth's.

At some point in the future, the Boreons made contact with Humans, and both worlds engaged in a cultural exchange program. Even before mutual visitations could occur, the Boreons told that they would be anxious to receive émigrés from other races; particularly males. Such was their situation that they stressed out that they wouldn't place any kind of restriction on whoever Earth was willing to send, and even offered to finance the entire operation.

Retrieved from "https://aliens.fandom.com/wiki/Boreon?oldid=158485"
Community content is available under CC-BY-SA unless otherwise noted.