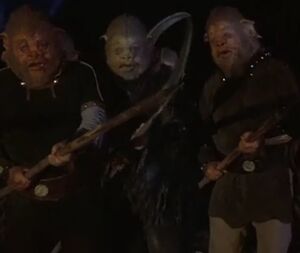 Battlestar Galactica
The Borays are a sapient, non-spacefaring species of mammalian humanoids from the planet Sectar, in Quadrant Zeta.

Borays are social creatures which are known for following their leaders unconditionally. Their technology is primitive, but includes spears and clothing. They can make fire, grow crops, and use camel-like creatures as mounts. Their language consists of animalistic grunts, although they seem to be capable of understanding Human speech, at least to some degree.

After Humans settled on Sectar, the Borays soon abandoned agriculture, as they found it easier to steal from Humans than to grow their own food. They started periodically raiding the colony every full moon, taking all available grains, occasionally abducting women, and killing whoever was appointed as Constable.

Retrieved from "https://aliens.fandom.com/wiki/Boray?oldid=184523"
Community content is available under CC-BY-SA unless otherwise noted.