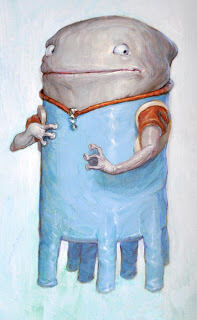 The True Meaning of Smekday

Boov evolved in seas of Boovworld. 100,000 years before the invasion on Earth that happened in 2013, first primitive CaveBoovs appear on the planet living in underwater holes. 8,000 years ago they became more social creatures, leaved caves, invented farming and start creating clans that were fighting with eachother. Also in this period they create religion based on believe that they sea was God. 100 years later they created basic tools and in next 200 years they were inventing more things like wheel, instrument called spiked tubaharp and tubaharp de-spiker.

5,000 years ago the first Boov went onto land. He ran up the beach, touched a tree and because of that he won 5 dollars and died of asphyxiation. He became a hero and inspired other Boovs to leave water. In next 10 years Touch the Tree became the most popular sport in Boovish society. It remained so for next 2,000 years. During this period Boovs noticed that players had lower changes and died of asphyxiation.

4,700 years ago is where the Boovs started studding science and creating art, building universities and industry. 3,000 years ago all clans were united under rule of HighBoov, leaders of Boovish race and high priests of sea. They consecrated Touch the Tree as sacred act reserved only for them. However many people were playing this game in secret.

2,000 years ago HighBoov closed most of schools and stared assignment of lifetime tasks to rest of population. 1,150 years ago scientists started warning that industry were polluting waters and unless something change, oceans could be not longer able to sustain the life. One year later HighBoov claimed that scientists can't proved they warnings. They were named Forgotten and send onto land on exile.

In year 1010, pollution of water causes death of most underwater species and oceans couldn't sustained life anymore. One year later HighBoov declared that living on land was Grand Destiny of Boovish race and entire specie leave water. During that some part of population died. In year 1011, Forgotten find Boovs, showed them how survived on land and civilization that they build on exile. 2/10 of year later Boovs banished they again and took they cities. During that they started keeping long-eared koobish on livestock.

500 years ago seas of their planet were again availabled to sustained life however Boovs stayed on land. This time they civilization achieved huge technological development including creation of robots and AI that was inventing more things. They were building huge advanced cities. In that era 48% of Boov population was working as statisticians and 18% was determining which colour should have things. 400 years ego art was replaced by entertainment and 50 years later it was replaced by talking about entertainment. 425 years ego most Boovs using phones and computers to communicate and face-to-face is mostly replaced by prints on T-Shirts.

In 1713, Boovish scientists tried send first life organism, long-eared koobish, into space. Unfortunatly animal called Peeches clicked red button and entire capsule exploded. In 1717 after second attempt koobish named Poolah is reaching space and dies of asphyxiation. In 1719 animal named Haanie entering space with breathing mask and air tanks. Its capsule hitting another spacecraft that was going in opposite direction from neighboring planet. One year later scientists deciding to calling animals sending in space and in 1721 unnamed koobish entered space, circumnavigated Boovworld twice and landed in ocean. After that animal eaten meal and had parade during which it dies because of natural causes.

Between 1728 and 1907, the first Boov entered space and landed on Boovworld's moon, where he throwed a frieze as an experiment. During this time Boovs visited other planets and met other civilizations including Mahpocknaph'ns that given them technology that help Boovs developed teleportational cloning. In 1908, they met the Nimrogs that weren't friendly to them and in 1991, this species conquered the Boovs' homeworld and forced them to leave their planet.

On December 24, 2013, on Christmas Eve, after many failed attempts to land on planets and call each one home, the entire Boovish population arrives in a fleet of ships to Earth and under Captain Smek rule, used their advanced technology to take over the Earth without bloodshed. Human population was relocated into Happy Mouse Kingdom in Florida and rest of the planet was settled by Boovs. After that they started transforming Human culture into Bovish, including renaming name of Earth to Smekland and Christmas to Smekday and imposing new form of calendar that had 3 months: Boovember (329 days), Humanuary (5 days) and Mitch (31 days).

6 months later, Boov called by Humans J.Lo had accidentally transmitted a strong test signal in the wrong direction that gave away the Earth's location to the Nimrogs and forces them to evacuate from the planet while this species conquered that world. After the Nimrogs left Earth, deciding to leave the planet alone, the Boov returned to Earth and shortly after, they helped humans get it back to what their culture was before the Boov Invasion. Then Earth became inhabited by two species sharing one entire planet.

Boov are relatively short creatures compared to humans, adults are roughly the size of human children. They are amphibious and are exceptional swimmers. The Boov's have two eyes and arms with four fingers. They only appear to only have nine molars spread in their mouths that can crush material like plastic. The Boov can breath air, but through tentacle like nostrils attached to the sides of their heads like horns that they can coil. Their digestive tract is more durable than a humans, able to break down plastic, glass, motor oil, etc. The Boov have six stubby pods that they walk or run on. They can jump but not as far or high without an outside force acting on them. They don't have hair but they have feelers that look close to it. The Boov are very durable, being able to be crushed by large, heavy objects. The Boov has the ability to change color, both voluntary and involuntary. They usually change depending on their emotions or actions. Yellow is when they are scared. Purple is when their body is struck or is vibrated. Blue is when they are sad, confused or depressed. Red is when they are angered. Periwinkle is when they feel extreme fear or shock. Pink is when they feel love or affection. Orange is when they feel happiness and excitement.

The Boov are known throughout the universe for being the best at running away. They frequently flee from their enemies or danger. Since their previous planet spread the Boov far apart from each other, they didn't have neighbors. Because of this they don't require companionship or show affection for others. The Boov are always isolated and are often absorbed in their current activities. They don't fully understand other cultures, mistaking inedible objects for food and speaking broken English, though they appear to be fluent in other languages.

The Boov's technology is based around bubbles and plasma energy. They use bubbles as a way of storage and to help make clear domes. The plasma is used to power the bubbles and fuels their many ships. Their "Phones" are also made by bubbles and plasma using the bubbles to make a sort of screen and the plasma to power it. Their weapons consist of bubbles that can erode any substance immediately and at the beginning of the movie you see the red bubbles making holes in buildings. They have a powerful way of turning things like drinks, Slushies and more into power sources but their primary power is from bubbles and plasma. 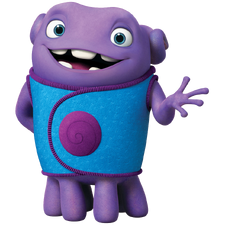 Oh in the movie Home. 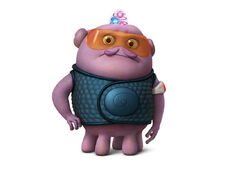 Officer Kyle in the movie Home. 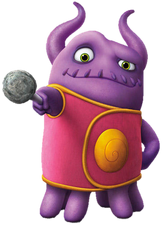 Captain Smek in the movie Home.
Add a photo to this gallery

Retrieved from "https://aliens.fandom.com/wiki/Boov?oldid=194981"
Community content is available under CC-BY-SA unless otherwise noted.