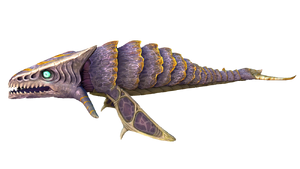 Subnautica
The Bone Shark is a medium-sized, armored creature with a large head featuring spikes extending backwards from many sides of its head, and a long, armored body. Its head features a large mouth full of small, razor-sharp teeth and two bright green eyes. It has two spiked pectoral fins and flukes at the end of its tail. It is of a dull purple color, with orange patterns on its head and back.

As its name suggests, the behavior of this creature resembles that of Earth's common sharks, often solitary and swimming after fast-moving small to medium sized prey. Like true sharks, the Bone Shark is also hunted by larger predators, and its main source of defense lies in its bony armor.

Retrieved from "https://aliens.fandom.com/wiki/Bone_Shark?oldid=172587"
Community content is available under CC-BY-SA unless otherwise noted.