Alien Species
Register
Don't have an account?
Sign In
Advertisement
in: Humanoids, All Tomorrows Universe, Bipedal Species,
and 9 more 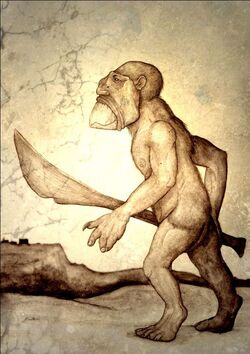 Nemo Ramjet
The Bone Crushers were one of the posthuman species descended from the Qu's posthuman pet species. Their ancestors were pint-sized pets bred by the Qu for the vibrant colors of their beaks, which were really fused teeth.

While, after the departure of the Qu, most species of those pets died out, the survivors evolved into a variety of herbivores and carnivores with specialized beaks. One of the bigger species, the scavenging Bone Crushers, were the first of them to attain sapience.

The Bone Crushers were about 3m high humanoids with clawed thumbs. Their name is derived from their heavy beaks, evolved for breaking the bones of dead animals. Due to their feeding habits, they always smelled like corpses.

They developed a civilization in which it was custom to show affection by defecating on others. Because they fed exclusively on carrion, their population growth was limited and their medieval society went extinct after a few millennia.