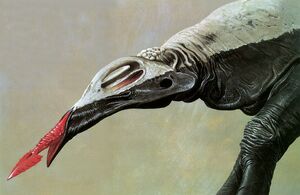 Expedition
A polar cousin of the Arrowtongue, the Bolt-tongue is a Darwinian predator which uses a large arrow-tipped appendage to kill its prey. Roughly the length of a large Utahraptor. The bolt-tongue possesses a sonar bulge in the form of an arch on the top of its head, which, like all predators on Darwin IV, it uses to locate it's prey. Unlike the closely related Arrowtongue, the Bolt-tongue has a more closed "tongue-sheathe" along with a thinner tongue. Compared to other animals on Darwin IV, the Bolt-tongue has a very large phallus, nearly the same length as it's tail, for which it is sometimes mistaken.
Retrieved from "https://aliens.fandom.com/wiki/Bolt-tongue?oldid=180065"
Community content is available under CC-BY-SA unless otherwise noted.