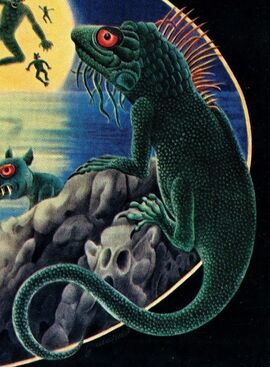 Bokrug is a guardian deity worshiped by the Thuum'ha, which takes the form of a giant water lizard dwelling in the mysterious lake in the land of Mnar. It may have originated on the moon, as both the lake and the Thuum'ha themselves are believed to have descended to the Earth from it.

Retrieved from "https://aliens.fandom.com/wiki/Bokrug?oldid=183004"
Community content is available under CC-BY-SA unless otherwise noted.