Alien
Bodybursters are a mutated Xenomorph variant incapable of maturing past its larval stage, which because of this resembles a large black chestburster. They may be considered a case of neoteny. They are also known as Axolotl xenomorphs

Like regular Xenomorphs, the Bodyburster's life cycle involves an egg-like ovomorph stage, with the Bodyburster egg being recognizable by its distinct pink coloration. When the ovomorph senses the presence of a potential host, it releases a facehugger, which implants the alien embryo inside the host to develop as a parasitoid. Their mature form resembles an oversized chestburster.

It is uncertain if this is a sub-breed of a regular Xenomorph genus, or whether it is a result of the "Class 10 virus" to which it may have been exposed or host to.

Members of this species have the odd ability to cause a bitten victim to disintergrate due to their venomous or infectious bite, in a similar manner to the "Human Scale Parasites" found on the "Cloverfield Monster" and in the deep abyssal trenches of the planet Earth. The Bodyburster seems not to have an inner jaw and it is amazingly fast.

This particular form seems to be eager to attack, either due to hunger or aggressive means. It shows no intention of hiding and maturing and instead, wreaks a long trail of partially disintegrated corpses along its path, as well as a trail of pink dust or slime.

A Bodyburster's pink egg was smuggled from amongst an ordinary clutch to the pleasure planet Celeste, where the creature, after escaping from its Human host, wreaked havoc among the population with its venomous bite before unceremoniously dying on it's own. 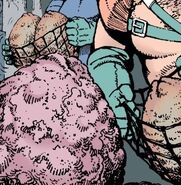 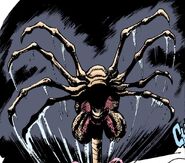