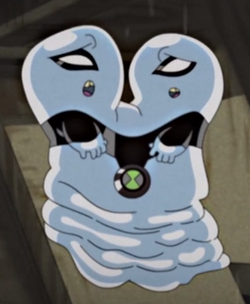 Ben 10
Bob the Blob's Species is an unnamed race of two-headed blob-like aliens from an unknown planet.

Members of this species are light grayish-blue blobs that have two heads, each having one eye and a mouth with cream-colored teeth, and a pair of small hands with five stubby fingers.

This species has sticky skin that allows them to stick to flat surfaces.

This species is very slow and unable to move a lot. 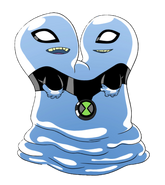 Bob the Blob
Add a photo to this gallery

Retrieved from "https://aliens.fandom.com/wiki/Bob_the_Blob%27s_Species?oldid=189336"
Community content is available under CC-BY-SA unless otherwise noted.