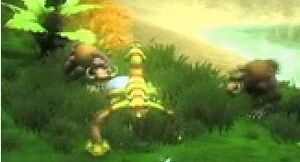 Boarmards are bulky herbivores that live in the plains of Bilzac. Instead of having four legs like an Earthly boar, these creatures have a set of six, making them hexopods. Boarmard are normally peaceful, but they can easily become dangerous if their nests are threatened. Their spiked pad on the backs, which probably evolved from the Aawkwaards' tail-feathers, don't seem to be used very often in Boarmard life, though presumably they are used should a Boarmard need to flee from a potential predator, firing off quills at their would-be foe in the process.

Retrieved from "https://aliens.fandom.com/wiki/Boarmard?oldid=180650"
Community content is available under CC-BY-SA unless otherwise noted.