"Look at that... Would you LOOK at that... They look like little children..."
―Gwen Demarco 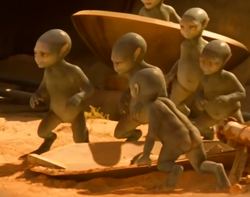 They are squat blue bipeds that highly resemble Human children. Based on their remarks it appears that their children resemble Humans in the age range of 30-40. They require water and seem to be carnivorous (cannibalistic even), Alexander Dane supposed that they were nocturnal based on their eyes, but that does not seem to be true (as the planet has two suns).

The little aliens do not seem to have much of a significant culture, but they have been observed squatting in the ruins of a mining facility. It has been suggested that they were perhaps the miners of the facility, but that does not seem to be the case.

They walk around naked and seem to be extremely violent and volatile. They feign sympathy to their injured, only to turn around and cannibalize them while they are unaware.

Few words of these species language are known, but it was able to be translated by Thermian translation circuits (which are likely based on those from the Galaxy Quest TV show).

Retrieved from "https://aliens.fandom.com/wiki/Blue_Demon?oldid=162775"
Community content is available under CC-BY-SA unless otherwise noted.