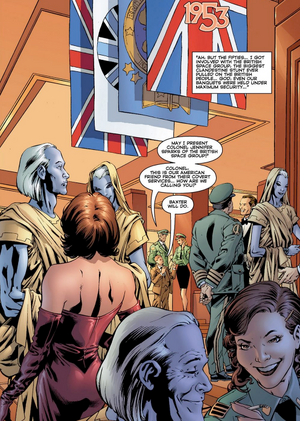 The Blue are a race of human-alien hybrids from an alternate Earth tentatively called Sliding Albion.

Sliding Albion's history differed from the mainstream Earth in which alien contact engaged overtly during the 1500s in Sicily. The two expansionist, Renaissance courtly cultures found common ground despite the vast disparity in technologies. This led to the aliens and human European royalty breeding creating a new alien-hybrid royal bloodline known as the Blue.

By the early 20th century, the two cultures fused into an imperialist society regressing into stagnation based in England. Seeking to break out of their cultural stupor and engage in a war the Blue's discovered how to breach the walls of the universe and into the Bleed for new Earths to conquer.

After 1821, the Blue's number's birthrates had begun to decline which prompted a Blue Sicilian warlord by the name of Regis with expansionist ideals, to conquer his Earth for the Blue. In 1826 he launched the Hanseatic Marches, a campaign that led into China, where his troops kill the men, while interning the women into rape camps to produce more Blue children.

In 1920s the Sliding Albion's Britain discovered Earth-50, and although a few skirmishes erupted between the Earth's Britain, two realities eventually settled down to friendly cultural exchanges by 1925. The British Space Group was used as a cover to disguise meeting between the two realities. However in 1953 peaceful contact ended when Sliding Albion fell into a World War, by the Blue bloods of Sicily that attacked Sliding Ablion(Britain) damaged their Earth with a bacterial outbreak. To save their Earth, Sliding Albion opened a shiftdoor to vent out the plague onto Earth, which culminated to a parallel war.

Colonel Jennifer Sparks of the British Space Group with assistance of Lorenzo, a Blue noble infiltrated Sliding Albion using their marriage as a ruse to kill Regis and throw the political infrastructure of the dimension in chaos. They were partly successful with Jenny killing the Blue warlord, however Lorzeno was interned by the British Space Group after his usefulness passed and Jenny had summarily divorced him. However Lorenzo kept one detail out, that Regis was alive and only castrated.

In 1999 Sliding Albion seeming resurfaced and opened shiftdoors to Los Angeles, bombarding the already recovering city with a massive fleet of ships. The Authority managed to launch a defense, and with Jenny Sparks powers of overloading their ships, forced the fleet to retreat. After Regis launched a surprise attack on the Authority's Carrier, Jenny launched her own counter offensive by lay wasting to the already wrecked Sliding Albion with the devastating power of the Carrier. The entire state of Italy, where majority of the Blue leadership located, was forcibly removed from Earth's orbit by the Doctor and left in the freezing space, the resulting removal of a massive piece of land causing massive casualties and tidal waves. The Authority left the ruined world of Sliding Albion warning them to behave.

The Blue were a fusion of two cultures, which is mostly theme on Euorpe's Renaissance society. They were considered royalty on their Earth reigning over the nations of Sliding Albion. However they suffered from low birth rates and technological stagnation. Their culture was founded in Renaissance Europe and as changed very little in the last centuries. Their technology is a combination of both culture, possessing advanced shiftships capable of moving through dimensions and possibly space.

Retrieved from "https://aliens.fandom.com/wiki/Blue_(Wildstorm)?oldid=181931"
Community content is available under CC-BY-SA unless otherwise noted.