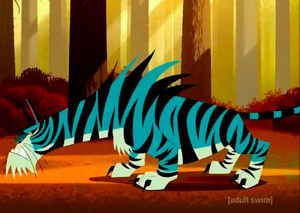 Thriving (on their own planet)

These feline creatures appeared in the Samurai Jack episode, XCIII

They were imported from their world to Earth by the demon Aku during his reign of tyranny. They appeared to be much similar to tigers or other real big cats, except they have black stripes, long snouts with many sharp fangs, two clawed toes on each foot, long tails that they can use like whips, green blood, and jaws that can be expended widely to bite an entire victim. Without Aku's tyranny, these animals would never transferred to Earth.

Three of these creatures appeared in the middle of the forest, while the wolf was walking through. The felines attempt to hunt and kill the wolf which ended up having a brutal fight, although the wolf survived and killed all three, it was seriously injured in the process

Retrieved from "https://aliens.fandom.com/wiki/Blue-furred_Feline?oldid=164479"
Community content is available under CC-BY-SA unless otherwise noted.