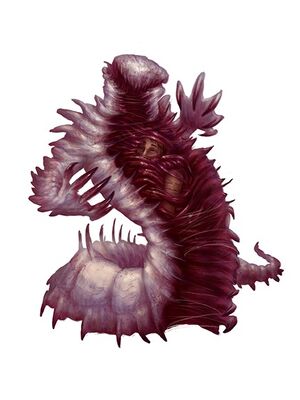 Pathfinder
Bloodbrothers are dangerous predators native to the frozen dark side of Verces, the fifth planet of the Golarion system. They are most notable for their unconventional and gruesome feeding habits, which give them their name.

Bloodbrothers are large creatures, standing 15 feet tall and 11 feet long. Their lower half resembles a huge millipede, while the upper body is vaguely humanoid in shape. They have no mouths, but instead a "rib cage" opening into their chest cavity. Their bodies emit an extreme, magical cold, so intense that it harms those who touch them. Freshly fed bloodbrothers have smooth, scaly, plated hides of a purplish hue, but when they grow hungry their skin turns white and sprouts fibrous hairs. This helps it grip and hide among snow and ice, the better to ambush prey with. An unknown aspect of their physiology allows them to heal most injuries within a matter of seconds, although they cannot regrow lost limbs.

Bloodbrothers hijack the metabolism of other creatures to feed themselves. They attack smaller animals and imprison them in their rib cages, connecting their own circulatory systems to that of their prey. The bloodbrother uses the victim as an auxiliary heart, leaching heat and nutrients from its body for months until it finally dies. At this point, the bloodbrother ejects the body from its chest cavity.

Despite their name, bloodbrothers do not have genders and reproduce asexually. At a certain point in their lives, precipitated either by a rise in temperature or by certain nutrients in its current prey, a number of furry nodules appear along its spine. The buds grow over several months to about a foot in diameter, at which point they unfurl into baby bloodbrothers and go off in search of their first meals. They reach adult size within a year.

While they act like bestial predators, bloodbrothers are actually sapient creatures as intelligent as humans. Because they neither use tools nor speak, this fact is poorly understood. However, bloodbrothers can understand language; they simply have no interest in communication. Among themselves, bloodbrothers communicate through touch and inference, possibly with the aid of pheromones.

Bloodbrothers usually live by themselves, but sometimes gather into groups, called clans, numbering up to six individuals. When food grows scarce, clan-mates move into more densely populated areas, taking on great risks rather than cannibalize each other. In such groups, the creatures generally live in caves, where one or two remain to guard the area while the others hunt and bring extra food back for them.

Retrieved from "https://aliens.fandom.com/wiki/Bloodbrother?oldid=180602"
Community content is available under CC-BY-SA unless otherwise noted.