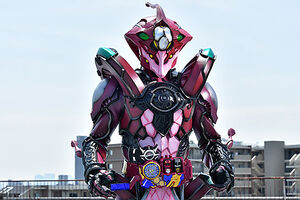 World of Build
The Blood Tribe are a mysterious race of planet destroying extra-terrestrial lifeforms who roam the universe devouring planets to increase their own power. Evolt, a member of the Blood Tribe, serves as the main villain of the Kamen Rider installment Kamen Rider Build while other Blood Tribe members appear as villains in spin-off movies.

It has yet to be seen if the Blood Tribe members have a corporeal form, as their main form appears to just be a blob of glowing red ooze. However, after absorbing the Black Pandora Panel with all ten Lost Bottles inserted, Evolt was able to assume a solid physical form pictured above. The members of the Blood Tribe are also capable of mimicking the appearance of anyone they desire.

The Evol-Driver is a device manufactured by the Blood Tribe that is used to amplify the already imposing power of a member of the Tribe by allowing the member to assume a Kamen Rider mode. It works by inserting two Fullbottles in the slots at the front of it and then cranking the lever. After Evolt brought their technology to Earth, the Evol-Driver was reverse-engineered by the human scientist Takumi Katsuragi to create the Build Driver as a safer version of it to be used by humans, as the Evol-Driver could not be used by humans by normal means. Evolt would eventually produce a second Evol-Driver which he gives to his human lackey Nariaki Utsumi, whom he recruited to aid him in his plans. The Evol-Driver also has an add-on called the Evol Trigger which its user can insert into it to obtain a more powerful "Black Hole" form.

The Pandora Box is another piece of technology created by the Blood Tribe. It was used by the Blood Tribe to annihilate planets so the Tribe could consume their energy. It is comprised of a silver-gray inner artifact and six panels outside of it that have slots to hold Fullbottles. When all six panels are brought together along with the box itself, the Box can be used to construct the Pandora Tower to annihilate all life on a planet. Later in the series, Evolt uses five of the panels, along with the Evol Trigger and all sixty Fullbottles, to create the Black Pandora Panel, which he intends to use after inserting the 10 Lost Bottles into it to assume his completed form and gain the ability to warp travel. However, Shinobu Katsuragi, another human scientist and the father of the aforementioned Takumi Katsuragi, managed to use the data from the six main Pandora Panels to construct a White Pandora Panel which could be used to destroy Evolt and thwart his plans.

A particularly sadistic member of the Blood Tribe who acts as the main antagonist of Kamen Rider Build, Evolt is the entity responsible for the annihilation of the ancient civilization of Mars millions of years ago. Before he could consume the planet however, he was sealed away within the Pandora Box by the Martian Queen Vernage.

However, Evolt escaped millions of years later when a Japanese-led Earth expedition to Mars led to Evolt possessing one of the astronauts and the Pandora Box being unearthed and brought back to Earth. As soon as the astronauts arrived however, Evolt caused his host to activate the Pandora Box, causing the rise of a massive structure known as the Skywall leading to Japan being divided into three separate nation states all hostile towards one-another, Touto, Seito and Hokuto. From there, Evolt would supply officials of each of the regions with Blood Tribe technology for the purpose of playing them against each other and repairing the Evol Driver and Evol Trigger in order to regain his former power.

A trio of members of the Blood Tribe who collaborated with Evolt to spark a war between the three competing regions of Japan, after Evolt assumed the identity of Seito's Prime Minister Masakuni Mido and unified the three nations under a single government, the three became the governors of Touto, Hokuto and Seito respectively. However, annoyed by Evolt's decision to put off destroying Earth in order to complete the Black Pandora Panel, the three plotted behind his back to destroy and consume the Earth themselves.

A human-Blood Tribe hybrid, as a fetus Ryuga was infused with Blood Tribe DNA when a fraction of Evolt corrupted the womb of his pregnant mother Yuri Banjou, leading to Ryuga fully developing and being born in just two months. Evolt would later possess Ryuga in order to become stronger, though he was eventually forced out of Ryuga by Sento Kiryu aka Kamen Rider Build.

Retrieved from "https://aliens.fandom.com/wiki/Blood_Tribe?oldid=181288"
Community content is available under CC-BY-SA unless otherwise noted.