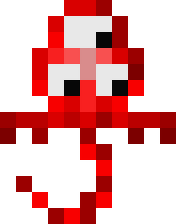 Blood Monkeys are a species of red, tricloptic creatures that apparently fill a niche equivalent to that of the monkeys of Earth. They wander around, presumably moving through the treetops like a monkey. They are apparently mischievous, as despite the fact that they will not pursue a planetary lander, they will still attack it if it gets nearby.