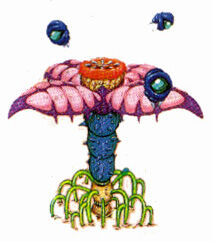 Metroid
Blob Throwers are strange, sessile organisms which spit out harmful blobs, likely as a defensive mechanism due to their sessility preventing them from fleeing. Another defensive adaptation of theirs is a hardened structuring that leaves only their mouth-like orifice at their top as a potential weak point. A useful weapon to utilize against them is Wave Beam technologies because of this, as otherwise an attacker would have to position themselves above the organism to deal any significant damage to it. The blobs spit by a Blob Thrower have a unique characteristic of slowly falling back down to the ground. When spitting their "blobs", the throwers will extend some from the ground, and they eventually have to stop in order to produce more blobs, at which point they retract back into the ground. This is the best opportunity to eliminate one as a potential threat.

Samus only witnessed these on top of a Chozo structure, which may indicate that they cultivated them on SR388.

They were collected by the Galactic Federation and were being studied aboard the Biologic Space Laboratory Research Station when the X Parasites overtook the entire station. All specimens were infected and killed by the X, and were utilized by the parasites to aid the Nettori in its battle against Samus Aran. Since the BSL was soon afterwards crashed into SR388 and it is presumed that this destroyed the planet - at least to the point where life was no longer sustainable upon it - the Blob Throwers are now considered extinct.