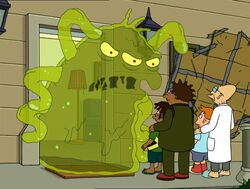 Blobs are a species of amorphous extraterrestrials of unknown origin who have settled on Earth, Venus and an unspecified gas planet's rings. All known Blobs are easily angered. The only substantial organs in their body is three eyes.

Blobs are non-humanoids. They travel by sliding around on the floor using all six limbs for arms. Blobs do not possess a one-way digestive system, instead they are able to swallow any food, or annoying species, so long as it will physically fit inside them. Swallowed items will sit, entirely visible due to their transparent body, inside them until digested or otherwise removed from the body. Other species have the ability to remove small items, through the chest of a Blob, but are unable to get themselves out should a Blob swallow them, likely due to a lack of substantial matter to use to pull their body through, which would indicate that the Blob physical body is generally frictionless. This may not be the case if the swallowed human is carrying salt, because salt de-solidifies Blobs temporarily.

Blob reproduction is unknown, but may involve their spewers, which may-or-may-not be exclusive to the female anatomy. Spewers are apparently offensive to some people, despite being seen in popular art.