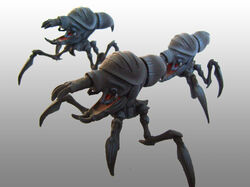 Starship Troopers
Blister Bugs are a morphological caste of the Arachnid Empire. Reddish-Brown in color, they are approximately three meters in length, with the anterior section ending in a huge gaping maw from which they can (and will) eject a corrosive green liquid powerful enough to burn through and destroying a wide range of substances, the least of all of which is flesh. Unlike the larger Tanker Bug caste, which carries a constant supply of its flammable bio-liquid, the Blister Bugs must instead produce its acid compounds within its abdomen before it can spit it up to a range of ten meters or more.

Detailed description of the Blister Bug, including photos.