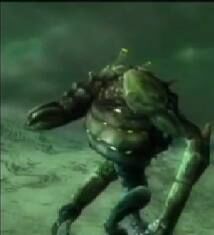 Destroy All Humans
The Blisk were once proud and mighty warriors that ruled an ocean paradise on Mars, and at least in part due to their pride, their enemies, the Furons went to war with them.

The Furons nuclear weaponry reduced their world to desert and wiped them out completely, or so they thought; At least one damaged Blisk warship escaped, and it drifted towards Earth and crashed in Tunguska in 1908.

The Blisk language is very close to Russian, which allowed the Blisk to blend in with the Russian society, and a Blisk by the name of Milenkov even became the premier of the USSR.

The Blisk plotted to launch spores onto the Earth and mutate it's population, but they were stopped by the Furon warrior Cryptosporidium-138, who destroyed their weapons, their only remaining ship (which was incapable of flight anyways) and their hive. The Blisk created a distress signal in an effort to save themselves, but that too was destroyed by the aforementioned Furon. Even after all missions of "Destroy all Humans! 2" have been completed, the Blisk can still be encountered in Tunguska, but they are never seen or mentioned afterwards, leaving their fate a mystery.

The Blisk also created spores capable of altering human biology and mutating humans, causing them to become loyal to the Blisk hivemind. While it was never specified whether it was through natural ability or advanced technology, Milenkov appearing to be human despite being a Blisk was remarkable either way.

The Blisk are bipedal black (or rarely white) crustaceans with short legs and very long arms that tower above both humans and Furons. The Blisk are almost completely immune to the effects of radiation and can fire an energy beam out of their hand (though it is unknown whether this is a natural ability or an implanted weapon). The Blisk appear to be hiveminded, and always refer to themselves in the plural.