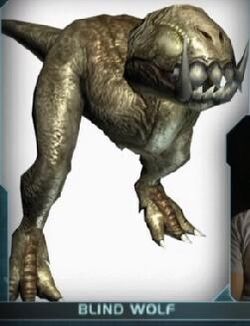 Halo
Blind Wolves were a species of eyeless predators found on Installation 04.

Possibly due to their blind nature or instead due to feeding on smaller organisms and thereby having some form of relatively passive nature, one could approach a Blind Wolf and mount it.

Unfortunately, due to the destruction of Installation 04, all known Blind Wolves were eradicated. Unless they also thrived on another Installation or very unlikely on whatever world they may have originated from, they are considered extinct.

It is highly likely that they were used as a food source by The Flood and the Covenant.