Alien Species
Register
Don't have an account?
Sign In
Advertisement
in: All Tomorrows Universe, Humanoids, Descendants of Man,
and 7 more 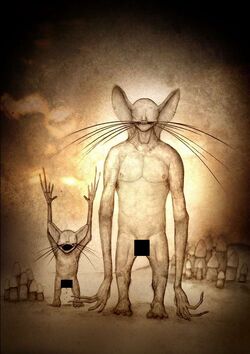 Nemo Ramjet
The Blind Folk were a posthuman species created by the Qu from a colony of the Star People. Their Star People ancestors hid underground when the Qu attacked, but they were found and remade into blind cave-dwellers.

The underground ecosystem created by the Qu contained giant, blind insects descended from vermin, giant birds and rats and fields of fungi. The predators include crocodile-like fish and giant predatory bats, and the ceilings of the giant caves were covered in bio-luminescent fungi and animals.

The Blind Folk are the human race living in this dark world, using loud screams, long fingers and whiskers for orientation. Their eyes, useless in a world of darkness, are entirely absent.

The Blind Folk and the rest of their ecosystem died out when changes in the arrangement of the continental plates destroyed the kilometre-high caves.