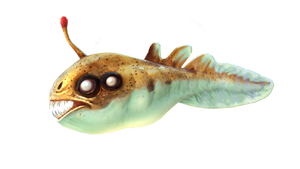 The Blighter is a predatory fish, and a relative to the more commonly known Biter Fish. This subspecies though is only found within the Blood Kelp Forests of Planet 4546B's oceans.

It behaves much similarly to its more widespread cousin, but due to living in a darker enviorment, the Blood biter has poor eyesight. It makes up for it with a stronger olfactory gland which it uses to track slow-moving prey such as Spinefish. Unlike the Biter, the Blood biter is more solitary.

Retrieved from "https://aliens.fandom.com/wiki/Blighter?oldid=172584"
Community content is available under CC-BY-SA unless otherwise noted.