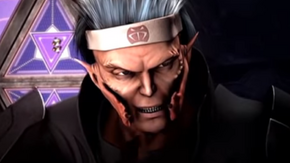 AniMen: Triton Force
The Blatarians are an alien humanoid species.

The Blatarians are said to have evolved from an insect species. They still maintain trace amounts of their precursors, possessing mandibles at the sides of their faces. They are pink skinned humanoids.

A militaristic culture, the Blatarians are ruthless warriors that enslave and dominate.

Millennia ago the Blatarians were a ravenous nomadic tribe that stumbled upon a nest of data crystals from an ancient unknown civilization. From these crystals the Blatarians gained advanced knowledge in warfare and genetic manipulation. The Blatarian tribe grew into a vast empire, their power spreading from galaxy to galaxy, conquering planets and enslaving every civilization in the known universe.

Led by Lord Como, the Blatarians were nearly unstoppable until those brave enough, the Anurians, rose to resist them. However even they were no match for the ruthless species. However the Anurians began investigating sources of data crystals from the Squamatans in hopes of gaining a technology that would turn the tide of war. General Modi of the Anurians managed to retrieve the data crystals from a Squamatan informant. However the Squamatan, deciding to play both sides, sold Modi's location to the Blatarians.

Rather than seize the General immediately, Como allowed the Anurian to escape from the Squamatan world, in order to follow him to gain the coordinates to the jump gate leading to Anuria.

The Blatarians tracked the Anurians just outside the threshold of the jump gate, where an Anurian destroyer The Intrepid waited to defend the general and the gate, along with the Anti-Invasion Unit Corp or Triton Force. A battled ensued between the pursuing Blatarian ship and the Anurians. The Anurians had the upper hand of the battle, until Lord Como emerged and entered the battle. Nearly all of the members of Triton Force were destroyed, but thanks to Col. Ghroy used a payload to wipe out majority of the Blatarians. The surviving forces battled a few skirmishes before retreating to their separate lines.

Retrieved from "https://aliens.fandom.com/wiki/Blatarian?oldid=160756"
Community content is available under CC-BY-SA unless otherwise noted.