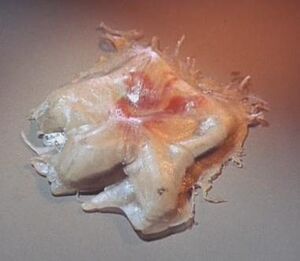 "It is not life as we know it, or understand it"
―Spock about the Blastoneuron, "Operation -- Annihilate!"

Blastoneurons are a species of nomadic lifeforms which travel from planet to planet across galaxies, infecting hosts in order to control their minds, resulting in mass spread of insanity and death. They are believed to be extra-galactic in origin, and are highly different from all lifeforms known to Federation science in the 23rd century.

The individual Blastoneurons are semi-amorphous; each resembling an enormous brain cell (described this way by Spock; quite possibly referring to Vulcan brain cells), and all communicate telepathically with each other, forming a huge, disconnected superorganism. They are able to fly in hover-like fashion by unknown means, though apparently for short distances only. When they find a suitable host, they infect it with a biological tissue which penetrates the host's neural system so deeply and intrinsically that even 23rd century surgical medicine is unable to remove it safely. The infection causes the host extreme pain and agony, imposes obedience upon them and presumably allows the parasite to feed and disperse itself to other planets by hijacking the hosts' spacecrafts. Eventually, the host will be rendered insane and die. The Blastoneurons spread efficiently, as evident by the fact that all known planets they went to had their civilizations decimated. They are also resistant to extreme temperatures, radiation and phaser fire. Fortunately, however, the parasites have a high aversion to some frequencies of light; which allowed Dr. Leonard McCoy to develop a treatment based on ultraviolet light, which will kill the parasite without any damage made to the host.

According to archaeology research, the parasites have been traveling the Milky Way galaxy for at least two hundred years (from the 2060s to 2267) and have caused mass insanity and annihilation of entire civilizations on four different systems: Beta Portola, Levinia, Theta Cygni and Ingraham B. The infection spread to the Federation colony on Deneva, but were defeated by a fleet of satellites emitting ultraviolet light, to which the parasites are deadly vulnerable.

Retrieved from "https://aliens.fandom.com/wiki/Blastoneuron?oldid=180710"
Community content is available under CC-BY-SA unless otherwise noted.