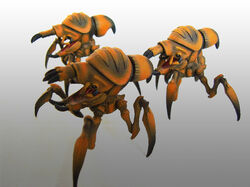 Blaster Bugs are a morphological caste of the Arachnid Empire. Reddish-orange in color, they are approximately three meters in length, with the anterior section ending in a huge gaping maw from which they can (and will) spray a flammable liquid that can burn at temperatures exceeding 500° Celsius. Swarms of Blasters can simultaneously fire large amounts of this fuel in synchronized bursts to create massive firestorms capable of fusing soil into a glass-like surface, but they can also generate enough residual heat to collectively form a dome-shaped heat shield that can actually successfully destroy incoming ballistics.

Like the better-known Plasma Bugs, their ventral sections are vulnerable to explosive attacks, giving foes leeway when battling swarms of them. Unlike their cousin-caste, the Blister Bugs, the Blasters will typically attack in swarms en masse (similar to Warrior Bugs) for maximum effect, whereas the Blisters will attack either individually or in smaller swarms that are supported by Warriors.

Detailed description of the Blaster Bug, including photos.