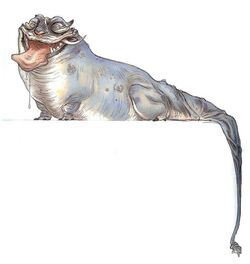 Blarths are non-sapient creatures indigenous to planet Naboo. Domesticable, and having a playful, friendly temperament, Blarths are widely kept as pets by the Gungans. The domestication of Blarths started in prehistoric times, when they were used as guard animals, as well as for companion. Today they are even exported to pet shops in other worlds, including Coruscant.

Blarths are medium-sized sociable beings that walk on four short legs. They have a stout body, a large head and a very long tail. They are naturally adapted to live in the swamps of Naboo, being agile and quick swimmers. They have blubber under their skin, which gives them buoyancy and insulation in the water. They use their long tail for swimming. The tail is also prehensile and has short appendages at the end, allowing the Blarth to catch prey with its tail. They can stay underwater for hours, given that they are able to absorb oxygen from the water with their skin.

Blarths have a wide mouth and a large elongated tongue. They are known to drool a lot. Although they have teeth (including one large tusk-like tooth), they are unable to chew and have to swallow their food whole, using the large amounts of saliva to help to break the aliment down. A wild Blarth's menu usually includes all sorts of small aquatic organisms, including Nyorks, Bowlumps, Gullipuds, Yobshrimps, among others.