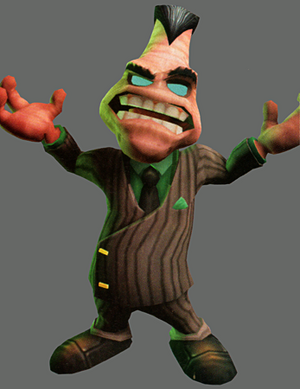 Varied. Ranges from short to roughly the same as humans

The Blarg are reasonably scientifically intelligent reptilian creatures that had adapted minor quantum compression technology and vortex manipulators, both of which are used in the Suck Cannon. They live on the planet Orxon. They speak Blargian.

The Blarg originated on Orxon which, in the events of Ratchet and Clank, had become overpopulated and poisonous, so they were no longer able to dwell there without the use of oxygen masks. The Blarg followed Chairman Drek's rule when he suggested building a new planet, and many Blarg were commissioned into Drek's Army. But after the defeat of Chairman Drek, the Blarg were forced to continue to inhabit their polluted world of Orxon.

The Blarg vary in physique. They range from diminutive to rather muscular and bulky figures. They all have a distinctive pair of glowing eyes, which are normally gold or blue in color. Many Blarg soldiers and employees seem to be unintelligent, but their scientists are brilliant inventors, rivaled only by Gadgetron. It later transpired that Drek had been polluting Orxon and was planning on doing the same to the Blarg's new world (and then re-do the process, all in an attempt to earn a lot of cash). After Drek's defeat, the Blarg became less hostile to the rest of the Solana Galaxy.

The Blarg are fine inventors and were responsible for inventions such as the Pilot's Helmet, Hydrodisplacer,Premium and Ultra Nanotech, the RYNO, The Suck Cannon and the Magneboots. They also presumably created Blargian Roulette.

Retrieved from "https://aliens.fandom.com/wiki/Blarg?oldid=183269"
Community content is available under CC-BY-SA unless otherwise noted.