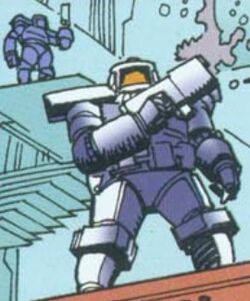 At least some members of this species act as an interstellar police force. Their ships are equipped with artificial intelligence and remotely control the methane-based life support system built within the Kappans' suits; which allow them to survive on planets with an oxygen atmosphere.

The Blagulon Kappan cops who arrived on Magrathea to arrest Zaphod Beeblebrox ended up being killed by malfunctioning of their life support suits. It was later revealed that their spaceship's computer had committed suicide after conversing with Marvin, the overly pessimistic paranoid android.

Retrieved from "https://aliens.fandom.com/wiki/Blagulon_Kappan?oldid=162847"
Community content is available under CC-BY-SA unless otherwise noted.