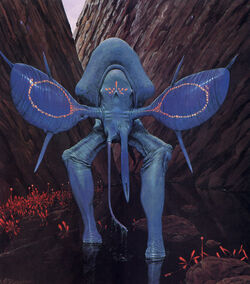 Expedition
Bladderhorns are life forms that live high on Darwin IV's mountain ranges. Solitary and aggressive creatures, they wander the mountain passes and high plains, where they feed upon the sub-surface bulbs of alpine flora. They are highly territorial, and if one encounters another, they will perform an elaborate, ritualistic duel, which involves ramming heads and showing off their bioluminescent patches. These duels are sometimes considered somewhat comical.

During mating season, the chilly air is rent with the sounds of their bellowing - an eerie, almost haunting bellowing call which is created by the inflation and subsequent deflation of their antler-bladders' air sacs, for which they are named. Their species is oddly a bright blue color, giving them a rather comical appearance. Their antler-bladders are often inflated to make themselves appear to be larger than they actually are, which can be used to frighten away predators or rival Bladderhorns.

They have very compact bodies, with a large hump on their back. Their antlers are connected to the sides of their head, while their mouths are asymmetric. On the right side is a tentacle-like appendage, presumably lifting food to the long, thin mouth on the left side. Bladderhorns to not have tails, merely a short spike jutting out in the place where their tail would be. A short, thin phallus hangs below their tail-spike.

Retrieved from "https://aliens.fandom.com/wiki/Bladderhorn?oldid=180063"
Community content is available under CC-BY-SA unless otherwise noted.