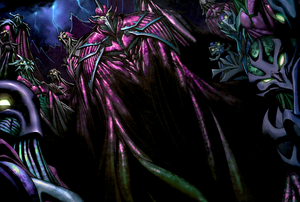 Fathom
The Black are the progenitor race of humanity and the Blue.

The Black were originally assumed to be black inhuman fish-like creatures, but it appears to be just armor they don themselves in. Beneath they are humanoids, though with pale skin, their true forms is living blue energy which their armor contains. Like the Blue, the Black can manipulate, water, energy and are telepathic. However, the level of hydrokinetic ability overshadows in comparison to the Blue. They can cause tidal waves the level of tsunamis and their arrivals are signaled by lighting storms.

The Black are an enigma to most of the world, even to the Blue, their evolutionary cousins. While the ocean realm hail them to be gods and mere legends, the Black are humble, only emerging from their depths to preserve the safety of the planet against threats they deem a danger, such as humanity. They see themselves as emissaries of the world balance, enacting their power to wipe it clean and start anew as they did generations ago, however they draw the line towards wiping out an entire race. They are isolationists, preferring to remain apart from the world. Since their display of power revealing their existence and the death of the leader Rahgar, they perhaps feel they no longer belong or that the world no longer needs them.

The Black were one of the very first lifeforms to take shape on Earth, and rose from the core of the planet when the planet was seeded with water. They are the ancestors of the Blue and humanity. For untold years they had remained hidden from the world and both races, only appearing when the planet faced destruction by both species, forcing them to cause an antediluvian purge to balance the world time and time again. However, the Black began to die out and long lost the ability to reproduce, they turned to their later descendants, humanity and the Blue to save their species. However, coupling with the other two races met with failure and often produced horrifying monsters. The Black accepted their fate and were content to remain within the depths in mediation. They faded into myths and legends to the Blue, however in modern times their leader Rahger, managed to successfully procreate with a Blue female, giving birth to Aspen, who contained the the power of the Black. Her birth brought hope for their species from extinction, however when they tried to claim the mother and daughter, they were repulsed by the Blue.

Later when the Blue faced an internal struggle, the Black retreated. When Aspen came of age, and had lived amongst Humans, the Black attempted to seduce her in joining them. Though she refused as Rahger wished to wipe humanity out for their crimes against the pollution of Earth's seas and the massacre of numerous Blue cities. As the conflict between the Blue and Humans met its climax, the Black appeared, frightening both sides with their power. Rahger was killed by a Human modified bullet. With the leader dead and their task in humbling humanity over the Black opted to return to the depths, away from the alien world that had forgotten them.

Retrieved from "https://aliens.fandom.com/wiki/Black?oldid=161185"
Community content is available under CC-BY-SA unless otherwise noted.