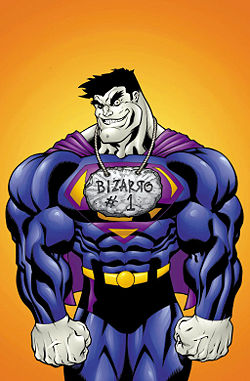 "Clark has told me about Bizarro. How he speaks in opposites. Makes the Joker seem sane..."
―Batman

This creature is actually the third being to assume the name of Bizarro. The first was a failed clone of Superman developed by Lex Luthor and a scientist named Doctor Teng. The second Bizarro was another failed clone developed during a time when Luthor was himself dying from a genetically engineered clone plague. This Bizarro however, has nothing at all to do with Lex Luthor.

A few years ago, the Joker managed to acquire for himself the 5th dimensional powers of Mister Mxyzptlk. With this power, he declared himself Emperor and created his own insane version of Superman. Bizarro was intended to imitate the role of Superman, but with the Joker's best interests at heart.

The creature was subsequently captured by the Pokolistanian dictator General Zod, and tortured, apparently just for the pleasure of beating someone who resembles Superman.

After escaping from Pokolistan with Superman's help, Bizarro recreates his Jokerworld headquarters, the Graveyard of Solitude, and at erratic intervals emerges to "help" or hinder Superman; the decision as to which being seemingly random, and the same amount of trouble caused either way.

Bizarro was later invited to join the Secret Society of Supervillains. Bizarro challenges Zoom to a race, due to Bizarro's complicated speech patterns, neither Zoom nor Cheetah are sure which end result of the race would convince Bizarro to join. The two race across the planet, Bizarro's erratic zig-zagging path becomes a point of contention with Zoom. When Zoom insults and threatens Bizarro, he is convinced that Zoom is his friend and joins. While with the Society, Bizarro kills the Human Bomb, commenting that he likes the flashes of light that the Bomb's powers produce.

One year later after the events of the Infinite Crisis, Bizarro was held captive by Lex Luthor and has been watching television in a small room for thirteen months. As a result, he is better informed than before.

Afterwards Bizarro leaves Earth to create a home for himself, creating a cube shaped planet, filled with abstract versions of various buildings and locations on Earth. Bizarro found himself lonely, however, He soon realized that under the power of a blue sun he gained a new ability called "Bizarro Vision". He uses his new ability to populate the planet with Bizarros, starting with a Bizarro Lois, that feared and hated him. Attempting to find answers Bizarro abducts Jonathan Kent, and Superman follows in pursuit. With Superman's help, he becomes the new Bizarro World's greatest hero.

Sometime later Bizarro mysteriously wound up on Throneworld; Home of Prince Gavyn. In fifteen minutes of confusion, an angry Bizarro defeated half of Throneworld's Imperial Guard before Gavyn stopped Bizarro by befriending him. Gavyn kept Bizarro sedated with food and cartoons until Adam Strange, having learned from the Weird of Bizarro's presence on Throneworld, teleported the two to Hardcore Station to aid his overpowered allies. Bizarro became embroiled in the war between Rann, Thanagar, Lady Styx, and Synnar.

Blue Kryptonite has proven to be fatal to Bizarro. Exposure to blue Kryptonite radiation drains away Bizarro's strength, and prolonged exposure will ultimately kill him.

Bizarro wears a chain around his neck with a stone medallion that reads, "Bizarro No. 1" (the second "R" in Bizarro's name is reversed). Ironically, this version of the Bizarro is the third being to assume such a name since Crisis on Infinite Earths. In Bizarro-logic however, declaring himself No. 1 makes perfect sense. His costume is the same as Superman's except for the colors, pink instead of red and purple instead of blue, and the "S" logo, which is backwards.

Retrieved from "https://aliens.fandom.com/wiki/Bizarro?oldid=177922"
Community content is available under CC-BY-SA unless otherwise noted.