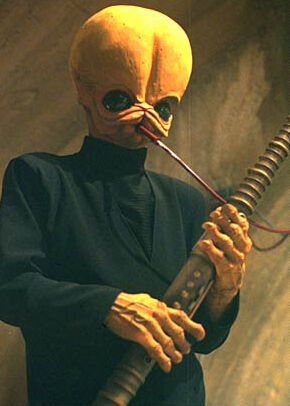 Externally, Bith have a typical humanoid body plan: they are bipeds; have two arms with five-digited hands that are used to manipulate objects; and a head where their eyes, olfactory organs and mouth are placed. The olfactory organs are situated in the flaps present on their face. Bith have a single lung.

Bith have excellent smelling and hearing. In fact they can perceive sound and music as well as Humans and other species perceive light and colors, making Bith great musicians. Their large eyes are able to see near objects very well, but are not well suited for seeing far away objects.

They're highly vulnerable to the effect of sonic grenades, which cause their heads to explode.

Bith are among the most ancient civilizations of their galaxy. They possess highly advanced technology.

Retrieved from "https://aliens.fandom.com/wiki/Bith?oldid=183640"
Community content is available under CC-BY-SA unless otherwise noted.