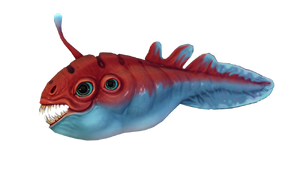 The Biter is a small predatory fish, and one of two members of its main group (the other being the Blood Biter), that inhabit Planet 4546B's many oceans. The Biter's body greatly resembles a real life tadpole, albeit having a greater size. It has two eyes on each side of its head, and a small mouth full of razor sharp teeth. On its head features many black stripes. The Biter has no pectoral fins, possessing only dorsal and caudal ones running along its body length. Its upper body is a bright red, while its underbelly is a dull blue. It also has a small blue bioluminescent lure on its forehead, which is presumably used to draw in prey during the night.

The Biter usually form shoals or small groups of two to three individuals, though more will gather and swarm if food is nearby. An individual Biter feeds on smaller fish, but a whole shoal is capable of killing creatures one hundred times its own weight. ninety four percent of its body consists of muscle, with the other six percent devoted to connective tissue and the vital organs.

Retrieved from "https://aliens.fandom.com/wiki/Biter_(Subnautica)?oldid=172583"
Community content is available under CC-BY-SA unless otherwise noted.