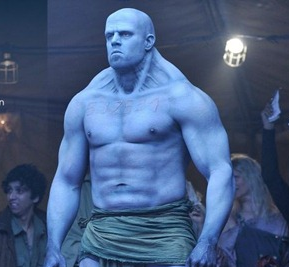 Defiance Universe
A Bioman, also known as a Bio-Marine, is a synthetically-created sentient being.

Biomen are physically similar to humans but are larger, taller, stronger, much more densely muscled and possess a greater capacity for injury. They come in a wide variety of skin tones both natural and unnatural colors such as blue; they also have eyes of vivid colors. Biomen have hearts and blood and are susceptible to drugs. Biomen do possess functioning genitals but it appears that they are unable to reproduce except through the genetic growth of new biomen. Biomen have a genetic decree programmed into them, which was done to remove all individuality and independence and make them follow orders without questions, however some strains can exhibit these undesirable traits. (World of 2047: Alien Races & Cultures, Data Recorder:Bioman Adreno Test, Pilot, A Well Respected Man, Nuclear Power comes to St. Louis, Data Recorder:Reporting for Duty)

Biomen are separated into different batches, named after U.S. Presidents and each Bioman is branded with individual serial numbers. Every batch has a different deactivation switch on their bodies which when hit will render them unconscious, an electric current will revive them. (Defiance: Alien Races & Creatures, Pilot)

The known batches are:

Biomen were designed to follow orders and as such have little to no strategic skill. They become frustrated and angry when denied opportunities to engage in combat and have trouble integrating into the society of others. They have few social skills and frequently misunderstand what others are talking about. Despite their aggression, Biomen are said to be very caring and nurturing, Most of them just want to be perceived as normal. (Defiance: Alien Races & Creatures, Data Recorder:Reporting for Duty, Dead Air, Loose Ends Unravel)

When the Votan Ark fleet was detected heading for Earth in 2000, the Bioman project was started to create a genetic super soldier that could easily fight whoever was aboard the ships; Von Bach Industries did most of the work. When the programs existence was revealed in 2013 a number of human rights groups argued over the moral dilemmas of creating sentient beings. Despite assurances from the Votans that they were not hostile, the project continued and after 20 years they had successfully created viable soldiers, growing them in massive vats and keeping many in stasis in hidden bunkers. (Government under fire for cover-up, VBI Introduction, Defiance: Alien Races & Creatures, Intel:Viable Embryos, Dead Air)

In 2025 during the Pale Wars, the Earth Military Coalition began deploying the Biomen in the field. After devastating losses, the EMC unleashed the Biomen in the Battle of Bloody Kansas, slaughtering every Votan in Topeka. During the terraform blast that hit the Bay Area in 2031, a number of Biomen were affected much like Humans and became horribly mutated. A group of Biomen formed an alliance with some Gulanee, took over the city of Vancouver and declared the territory of British Columbia as their own. (Nuclear Power comes to St. Louis, Inside Defiance: Episode 14, Intel:The Mutants, World of 2048: 2048 Map)

After the war the Earth Republic attempted to integrate them into their security forces but many began to behave erratically when not engaged in combat. Some of them ended up working for the Votanis Collective despite their programming, many also began to work with the Raiders and others were employed by wealthy individuals - Datak Tarr hired Ulysses as a guard, Niles Pottinger had Churchill as a bodyguard and revived four Biomen, George, John, Paul and Ringo as servants and Conrad Von Bach had Benedict as his bodyguard. (Defiance: Alien Races & Creatures, Mission 04: Shootout in a Votanis Camp, Pilot, Dead Air, The Beauty of Our Weapons)

Retrieved from "https://aliens.fandom.com/wiki/Bioman?oldid=177471"
Community content is available under CC-BY-SA unless otherwise noted.