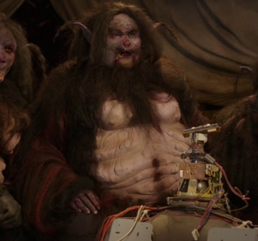 "We prefer the ship of green, and the sexy light man with the lady legs so long and luscious"

Biologically Engineered Garbage Gobblers, referred to as BEGGs, are a type of GELF designed on Earth to eat refuse, with digestive systems capable of processing sediment, sludge and slop. This leaves them permanently inebriated, with breath that "can sandblast buildings". In appearance they are similar to the Kinitawowi, only more goblin-esque with pointier ears and less hair, including a gorilla-like chest. Like the Kinitawowi though, they are also one of the friendlier kintetiakh, or tribes of humanoid GELF, although they have been known to eat the occasional human, such as one unfortunate member of an English boarding school.

They appeared in the Series X episode "Entangled", in which they beat Dave Lister in a poker game. Lister bets Arnold Rimmer after first losing Starbug to them, and loses again. In order to ensure the deal, they fit Lister with a groinal exploder recovered from the Erroneous Reasoning Research Academy. They are seen living in cloth-roofed wood huts, though this may just be them adapting to the conditions of that one given moon. Lister attempts to get them to accept the "fabled spoon of destiny" instead, but they see through the ruse, proving that they are more intelligent then they first appear. They instead offer Lister the chance of a rematch, putting Kryten and the Cat on the line this time. In the end the entire batch suddenly die by choking to death on electrical chords, leaving Lister trapped with the exploder.

Retrieved from "https://aliens.fandom.com/wiki/Biologically_Engineered_Garbage_Gobblers?oldid=180628"
Community content is available under CC-BY-SA unless otherwise noted.