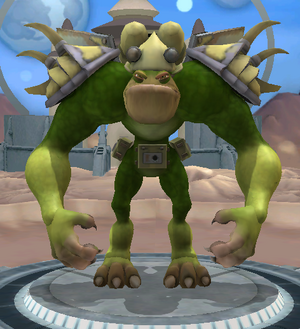 The Bingfish is a species that can be found within the SPORE Universe.

Bingfish, despite the name, hold little resemblance to any aquatic creature. They stand on small legs holding up large muscular arms with human-like claws. Their mouths hold numerous sharp teeth. The Bingfish as a species easily evolved well past their animalistic nature, though still hold a slight bit of aggression as carnivores.

The race has developed technology well enough to travel through space, presented mostly as a race to protect rather than to conquer. Studies in their history had shown that as tribes, and even as normal animals, their physical appearance has altered very little if at all, the only thing developing overtime being their brains.

Retrieved from "https://aliens.fandom.com/wiki/Bingfish?oldid=169428"
Community content is available under CC-BY-SA unless otherwise noted.