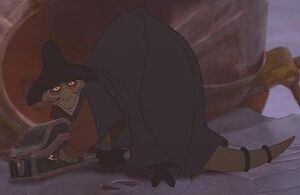 Billy Bones is a pirate who owned a legendary map; a map that reveals the location of the Treasure Planet. Bones was chased by the cyborg Long John Silver and his men, who wanted the map. Before dying, Bones gave the map to a young Human named Jim Hawkins, and asked him to protect it from the cyborg.

Retrieved from "https://aliens.fandom.com/wiki/Billy_Bones?oldid=119348"
Community content is available under CC-BY-SA unless otherwise noted.