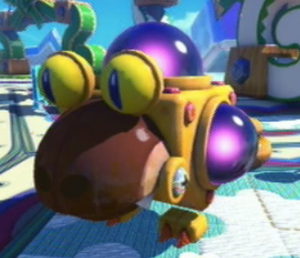 Pikmin
The Bilious Bulborb is a Pikmin Adventure exclusive species of Grub-Dog. While it is seemingly modeled after the Orange Bulborb, its smaller spots suggest that it might not be a type of Bulborb at all.

Bilious Bulborbs are fairly large mechs for the attraction, and placed in said attraction as a mini-boss. They hold a number of slight resemblances to the elusive Orange Bulborb: a brown coating on the head, and cat-like irises for its eyes.

These Bulborb mechs aren't programmed for movement in the same manor as the other Bulborb mechs, and instead stand still and shoot projectiles at its targets in the form of spiked balls. While harder to beat, it has more weakpoints along its body.

Retrieved from "https://aliens.fandom.com/wiki/Bilious_Bulborb?oldid=169426"
Community content is available under CC-BY-SA unless otherwise noted.