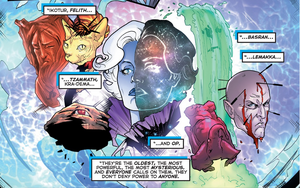 The Big Seven Entities of the Foundationals are a group god-like beings that exist in the Panalethium.

The Big Seven Enities, while not gods per say to the inhabitants of the Panalethium they are regarded as such entities. They command power that act as the fundamental forces of sorcery. From them magicians can call upon the power of these entities to fuel their spells.

These seven are the oldest and most powerful in the mystic community. However it's debated on whether they still exist corporeally or have transcended to another plane. All parties however do not dispute their power.

Retrieved from "https://aliens.fandom.com/wiki/Big_Seven_Entities?oldid=161323"
Community content is available under CC-BY-SA unless otherwise noted.