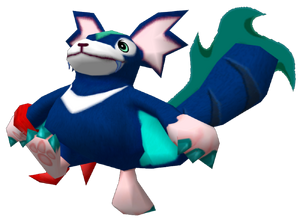 The Biboo is a species of Egg Animal mostly resembling a Flying Squirrel.

A Biboo is blue in color, with cyan loose skin between its arms and legs. A moon crescent shape of white fur marks its chest, and its tail is crested with dull green fur.

It is capable of gliding and moving through the air, similar to a boomerang.

Retrieved from "https://aliens.fandom.com/wiki/Biboo?oldid=173243"
Community content is available under CC-BY-SA unless otherwise noted.